Mohammad Zahid the Founder of Myride.ae Featured in Gulf News

To this day, his life has been quite a roller coaster ride. Lots of highs, with a few sharp drops.

It is not that he wasn't born with a silver spoon in his mouth. He totally was. That didn't affect how he grew his business. It was his own grit and determination that landed him at the place he is sitting comfortably in right now.

In fact, when adversity struck his family and their good times and luxury living went into a downslide, Zahid held his head high and worked hard to get back all that they had lost. Find out how he went from having everything to nothing, to everything again.

For the record, Zahid is CEO and founder of three companies in the UAE.

Together, they are worth Dh12 million today.

MyRide.ae is an online venture, the first company he started in 2018 and it is currently valued Dh5 million. Tripzy.ae is a company he set up following the success of Myide.ae and this company stands at a net worth of Dh3 million today. A third company, Dechmont is also valued Dh4 million today.

In an exclusive interview with Gulf News, Zahid said the projected value of his companies is expected to touch Dh100 million by 2021.

Plans are to list them on the Dubai Stock Exchange a year later, according to the 25-year-old CEO.

Indeed at such a young age, Zahid has enough and more maturity in him – not to mention a great business acumen and wisdom – all of which has put him on the platform he is today. He is leading his team along with his co-partner Mohammad Marwan, also an Afghan expat, and together they manage a total inventory of more than Dh20 million currently. 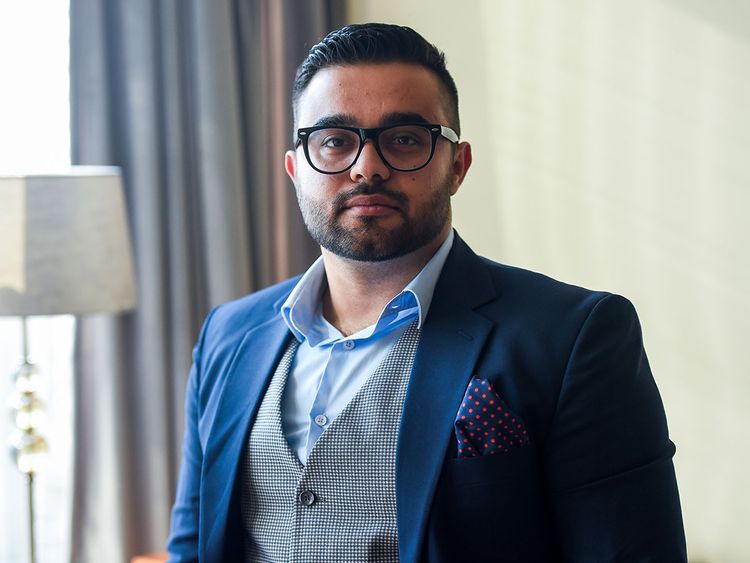 A little bit of a background

Zahid came to the UAE with his parents in 2006. He was 12. His father, Mohammad Asif Hashem, was a successful businessman dealing in construction and oil supplies.

By the time he (Zahid) turned 18, his father gifted him an AudiR8. Zahid had just received his UAE drivers’ license, also completed his high school graduation (Grade 12).

So his father gifted him with the car as a reward.

Moving on to university

Zahid went on to do his bachelor's in business management from the American University in Dubai (AUD). It was during the third year of his college, his father, Hashem, ran into major trouble with his business partner.

He (Hashem) was cheated by his business partner, who was also an Afghan national and lost everything he made in the UAE. In May 2018, Dubai prosecutors issued an arrest warrant against the man who cheated his father and he (the accused) was sentenced to three years in jail for issuing a cheque to the tune of Dh214 million to Hashem before defaulting on the payment. “It was big news. After this, we wanted to leave the UAE. We decided to relocate to someplace in Europe and decided to move to Ireland.”

Zahid’s life was on a downslide.

So all of a sudden, he found himself in Dublin. Albeit his heart was in Dubai and UAE. “I grew up there. This is the country where I have friends from all over the world. With Indians, I speak Hindi, with Egyptians I can speak Arabic in their style. This is the most beautiful thing about the UAE. It is a melting pot of cultures and I love it even today. I missed this in Ireland and every day I wished to be back in the UAE.”

Adding to this, the tough financial times the family was going through did not make things any better.

“I had everything I wanted, fancy cars, great house and suddenly it was all gone,” he said.

Being the oldest, Zahid felt a surge of responsibility hit him. And so he spent his time gaining more skills and adding educational qualifications for himself.

Equipping himself with education

Zahid decided to pursue his master's degree. A double major in International Business and Law at Griffith College in Dublin.

“I first took up law as my master’s degree. But the head of the faculty at the college persuaded me to do business as well. I cannot thank him enough for this. He identified my interest and potential. I convinced him I would do both and promised to see him at the graduation at the right time.”

“My faculty head came in my life like an angel. This was perhaps the turning point in my life. I began to value life and respect what I had been given in life so far.”

After his master's graduation, Zahid urged his father and family to return to the UAE and start life afresh.

The family – Zahid, his parents, and six siblings, all returned to the UAE again in 2017.

But this time the millennial wanted to get it right. “I definitely did not want to make the mistakes from the past. I also knew that while my father was finding his footing in the construction business, I did not want to get involved in that.”  There was an idea lurking in his head. He wanted to tap into the luxury segment and the society of the world. “When you think Dubai, what comes to your mind.

The tallest, biggest and the best. The crème de la crème of the world loves to be seen hobnobbing in Dubai and they like to do it in style. So I thought why not tap into this market? I found a gap and dove straight in,” said the Afghan entrepreneur.

And so MyRide.ae was born.

It is an online website where you can book a luxury rental car, paying very little security deposit. There are two ways the website is scoring high — one is with their car delivery time.

“I assure customers their cars will reach them faster than their pizza. The second is that we charge a very low-security deposit. Remember while hiring a luxury car on rental there is always a deposit attached. This is for the supplier to be insured against any accident and incidental expenses on the vehicle. "Back in the USA if you want to drive a Ferrari you have to shell out Dh30,000 just for a security deposit. This eats in big-time into your cash flow. When you are on a holiday you want to keep your cash reserves and so I decided to rent luxury cars with very little security deposit. It is a risk I take but no business can be a success without risk,” explained Zahid.

Following the success of MyRide.ae, Zahid and his co-partner Mohammad Marwan, also an Afghan expat, decided to launch another website, Tripzy.ae.

“The idea is to provide a one-stop platform for visitors, tourists and residents alike. So basically someone who is booking a luxury car to drive in Dubai and he is a visitor to the city, he is probably considering booking a hotel as well. So I thought why not provide that too.

"And then he probably wants to live it up here trying to get a feel of Dubai from an air, land and water perspective. So helicopter rides, yacht charters and fancy cars on the road it is. And Dubai takes pride in its five and seven-star hotels so I added this to my list of offerings as well.

"Basically, one can get a whole package done from us. I am dealing with a niche market. I would love to develop a product for a medium budget at some point. It would mean numbers, but right now my focus is on the luxury market,” he said.

The numbers say it all

And the numbers say it all. As mentioned earlier in the story, plans are to keep at it and get the numbers up further.

“When we launched the website first, there were four online portals we were competing in. I can now confidently say we are one of the biggest in the market,” he said Zahid.

Today, Zahid is working with a team of 16 people. “I never say they work for me. That is not a status I have achieved. We all work together. We are a team end of the day.”

How to make it big

There are three things that have made him a success today, said Zahid - networking, knowledge, and experience.

“It does not matter which industry you work in – these three things will lift you up. The money will come on its own. Don’t wait or crave for it. Do your best, your efforts will have to pay-off.”

If it were not for his dreams and love for life in the UAE, Zahid would not be the happening millennial entrepreneur he is today. So dream he says and go after your goals.